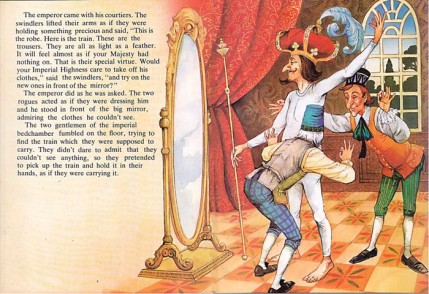 Many years ago, there lived an emperor (modern art purchaser or collector) who loved beautiful new clothes so much that he spent all his money on being finely dressed. His only interest was in going to the theater or in riding about in his carriage where he could show off his new clothes. He had a different costume for every hour of the day. Indeed, where it was said of other kings that they were at court, it could only be said of him that he was in his dressing room!

One day two swindlers (promoters of modern art including: gallery owners, museums heads, promoters in media, and university professors) came to the emperor's city. They said that they were weavers, claiming that they knew how to make the finest cloth imaginable. Not only were the colors and the patterns extraordinarily beautiful, but, in addition, this material had the amazing property that it was to be invisible to anyone who was incompetent or stupid (general public, students, and anyone who believes the lie that modern art requires talent or contains great value).

"It would be wonderful to have clothes made from that cloth," thought the emperor. "Then I would know which of my men are unfit for their positions, and I'd also be able to tell clever people from stupid ones." So he immediately gave the two swindlers a great sum of money to weave their cloth for him (Los Angeles County Museum of Art - paid $10 M for a plain, untouched, 3 ton rock).

They set up their looms and pretended to go to work, although there was nothing at all on the looms. They are given money, silk, and gold thread without limit to complete this marvelous fabric. They asked for the finest silk and the purest gold, all of which they hid away, while pocketing all the money, and continuing to work on the empty looms, often late into the night.

Curious about the enterprise, the emperor first sends his honest prime minister (modern art critic) to report on the progress. So the good old minister went into the hall where the two swindlers sat working at their empty looms. "Goodness!" thought the old minister, opening his eyes wide. "I cannot see a thing! Am I stupid?" he thought. "I can't believe it, but if it is so, it is best no one finds out about it. But maybe I am not fit for my office. No, that is worse, I'd better not admit that I can't see what they are weaving." So, when the old man sees nothing, he is afraid to tell the truth for fear it means he is unfit for his post or hopelessly stupid.

The two swindlers invited him to step closer, asking him if it wasn't a beautiful design and if the colors weren't magnificent. They pointed to the empty loom, and the poor old minister opened his eyes wider and wider. He still could see nothing, for nothing was there. "Gracious" he thought. "Is it possible that I am that stupid? I have never thought so. Am I unfit for my position? No one must know this. No, it will never do for me to say that I was unable to see the material."

"You aren't saying anything!" said one of the weavers.

"Oh, it is magnificent! The very best!" said the old minister, peering through his glasses. "This pattern and these colors! Yes, I'll tell the emperor that I am very satisfied with it!"

"That makes us happy!" said the two weavers, and they called the colors and the unusual pattern by name. The old minister listened closely so that he would be able say the same things when he reported back to the emperor, and that is exactly what he did.

The prime minister repeats to the sovereign what the swindlers tell him about the glorious design and wonderful colors of the cloth.

The emperor sent other officials (more modern art critics) as well to observe the weavers' progress. They too were startled when they saw nothing, and they too reported back to him how wonderful the material was, advising him to have it made into clothes that he could wear in a grand procession.

The entire city was alive in praise of the cloth. "Magnifique! Nysseligt! Excellent!" they said, in all languages. The emperor awarded the swindlers with medals of honor, bestowing on each of them the title Lord Weaver (Great Artist).

Everyone in town was talking about the marvelous cloth that the contractors were weaving. They had heard about the cloth's magic quality and most of them could hardly wait to find out how stupid or unworthy their neighbors were.

The swindlers stayed up the entire night before the procession was to take place, burning more than sixteen candles. Everyone could see that they were in a great rush to finish the emperor's new clothes. They pretended to take the material from the looms. They cut in the air with large scissors. They sewed with needles but without any thread. Finally they announced, "Behold! The clothes are finished!"

The emperor came to them with his most distinguished cavaliers. The two swindlers raised their arms as though they were holding something and said, "Just look at these trousers! Here is the jacket! This is the cloak!" and so forth. "They are as light as spider webs! You might think that you didn't have a thing on, but that is the good thing about them."

"Yes," said the cavaliers, but they couldn't see a thing, for nothing was there.

"What!" thought the Emperor. "I can't see a thing! This is terrible! Am I a fool? Am I unfit to be emperor? Oh, it is too horrible!"

"Oh, it is beautiful!" said the emperor. "It has my highest approval!" and he nodded his satisfaction. Nothing would induce him to say that he could not see anything.

"Would his imperial majesty, if it please his grace, kindly remove his clothes." said the swindlers. "Then we will fit you with the new ones, here in front of the large mirror."

The emperor took off all his clothes, and the swindlers pretended to dress him, piece by piece, with the new ones that were to be fitted. They took hold of his waist and pretended to tie something about him. It was the train. Then the emperor turned and looked into the mirror.

"Goodness, they suit you well! What a wonderful fit!" they all said. "What a pattern! What colors! Such luxurious clothes!"

"The canopy to be carried above your majesty awaits outside," said the grandmaster of ceremonies.

"Yes, I am ready!" said the emperor. "Don't they fit well?" He turned once again toward the mirror, because it had to appear as though he were admiring himself in all his glory.

The chamberlains who were to carry the train held their hands just above the floor as if they were picking up the train. As they walked they pretended to hold the train high, for they could not let anyone notice that they could see nothing.

The emperor walked beneath the beautiful canopy in the procession, and all the people (general public) in the street and in their windows said, "Goodness, the emperor's new clothes are incomparable! What a beautiful train on his jacket. What a perfect fit!" No one wanted it to be noticed that he could see nothing, for then it would be said that he was stupid. None of the emperor's clothes had ever before received such praise.

The fraud and deceptive activities were finally revealed by someone who was not afraid to speak the truth!

"But he doesn't have anything on!" said a small child. (realists, the classically trained)

"Good Lord, let us hear the voice of an innocent child!" said the father, and whispered to another what the child had said.

"A small child said that he doesn't have anything on!"

Finally everyone was saying, "He doesn't have anything on!"

The emperor shuddered, for he knew that they were right, but he thought, "The procession must go on!" He carried himself even more proudly, and the chamberlains walked along behind carrying the train that wasn't there.