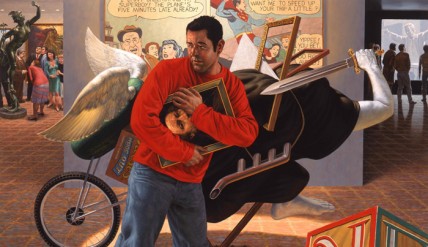 In 1974, when I was a freshman art student at a small Midwestern liberal arts college in Wisconsin, I wanted to learn to draw the human figure. One untenured professor took me under his wing and encouraged that process, but the department chair, an alcoholic abstract painter, stumbled into the studio late one evening while I was studying a plaster head that showed the muscles of the face. He slowly looked at me, then at the head. "This is not art!" he screamed, lifting the cast high and smashing it on the cement at his feet. Pleased with his stirring defense of Western Civilization, he staggered out the door.

Over the years my representational painting colleagues have expressed many similar stories, some funny in retrospect, coming as they do from the lucky few who successfully survived the vicissitudes of our academic art institutions. My experience was by no means an isolated incident for me. Other professors in other institutions purposely scribbled crude 'corrections' over carefully drawn works, daily held my work up to ridicule because of its style, or browbeat any opinion that tried to breach their academic dogma. I was a stubborn young cuss and held my ground. I often heard from fellow students, "I want to draw like you, but I don't dare!"

I wish I could say this academic prejudice against skill was a thing of the past. Unfortunately, it is stronger now than it has ever been. Conceptualism replaced abstraction as the dogma of the day, and has been in turn replaced by Postmodern hybridity, identity politics, or pure theory on the majority of college campuses. As in all educational endeavors, young minds are molded to fit the norm their professors set forth. De-skilling is the term I've commonly heard used to describe this odd institutional practice in the arts.